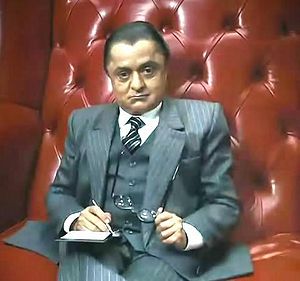 Gurdeep Roy (born December 1, 1957 in Nairobi, Kenya), better known as "Deep Roy", is a very short (4'4", or 132cm) Indian/Kenyan/British actor who is one of only two people to have appeared in all of the "big three" Science Fiction mega-franchises: Star Trek, Star Wars and Doctor Who (the other is Simon Pegg, whose character's sidekick is played by Roy in Star Trek). He has also appeared in many other famous SF works, including Tim Burton's film version of Charlie and the Chocolate Factory, in which he played all the Oompa Loompas.

Not to be confused with Kiran Shah

, another Kenyan-born little person of Indian descent who began acting in The '70s and is less than a year older than Deep Roy. You can see how people would get them mixed up.