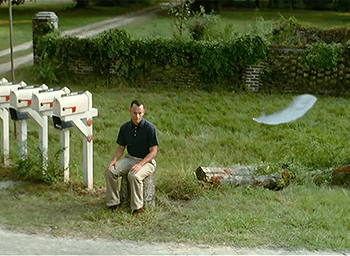 The camera sweeps across the landscape and focuses on a single white feather. A breeze blows and it begins to flutter, dancing away. The camera follows almost as if it was entranced. The feather travels far; through rain and snow, over mountains and through caves, it may even pass through a machine, dodge the pistons and avoid being set alight. The feather has become the main character for the moment, filled with suspense, beauty and purpose. It lands, then it's promptly stepped on by the lead character and it's on to the main story.

The Object Tracking Shot is where the camera follows an object around the world the story is set, giving a tour or a beauty shot. May be important to the plot but doesn't have to be; it can have the actual characters in the background doing some foreshadowing and it generally appears at the start of the show.

Compare Epic Tracking Shot. For following objects that tend to impale people, you're after the Arrow Cam.

The opening of "Forrest Gump"

The opening of "Forrest Gump"