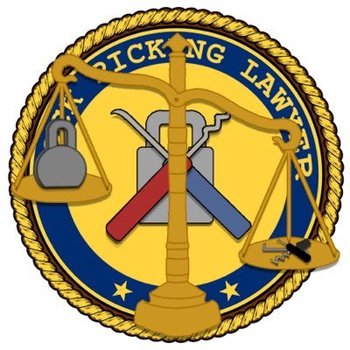 "This is the Lock Picking Lawyer, and what I have for you today is my TV Tropes page."
Advertisement:

Probably one of the more unusual video creators on YouTube, the Lock Picking Lawyer (shortened by many to LPL) is an Edutainment Show about picking the locks in their collection (or ones that have sent in by his fans, and in rare cases, companies themselves

), exposing their many design flaws and weaknesses, and how they, and by extension, his audience, can lockpick them and avoid them if they're on sale.

Part of the appeal of the series is the way the Lock Picking Lawyer is able to crack open even the more sophisticated locks within a short amount of time, and for acting as a PSA of sorts to potential customers on what locks are bad and what ones are resistant to picking, all within short, concise, and really informative videos.

You can find the wide selection of videos on their Youtube channel.

For any budding lock enthusiast, you can support LPL by buying a lockpicks set or a specific picking instrument (including the famous disk-detainer pick that he and Bosnian Bill made) via Covert Instruments.

"Lets get into Troping, shall we?":

"In any case, that's all I have for you today. If you do have any questions or comments about this, please put them below. If you like this video, and you would like to see more like it, please subscribe. And as always...have a good day!"