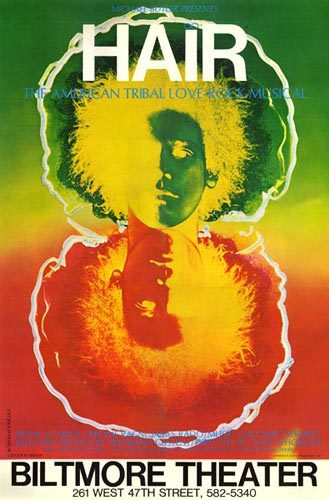 "Oh say, can you see my eyes — if you can then my hair's too short!"
—from the Title Theme Tune
Advertisement:

The original rock musical, Hair: The American Tribal Love-Rock Musical, debuted in 1967 and is very much a product of its time, particularly the bohemian, hippie, Free Love and anti-Vietnam-War movements, but at the same time has found new relevance in subsequent revivals, including the Tony Award-winning 2009 Broadway revival starring Gavin Creel and Will Swenson who both earned Tony nominations for their roles. It was also very experimental for its time, involving nudity, audience participation and with some actors planted amongst the audience, not to mention scandalous for reasons which will be covered in the plot synopsis. The libretto (lyrics and dialogue) were written by its co-stars, James Rado and Gerome Ragni, and the music by Galt MacDermot.

Hair was also made into a Rock Opera Concert Album and various hit singles including "Aquarius" and "The Flesh Failures (Let The Sunshine In)", and interestingly, was made into an often forgotten (but still unique) film, by Miloš Forman, starring John Savage. Both feature most of the original cast and variations on the original songs.

The musical centers around Claude (Rado), the leader of a "tribe" of New York hippies, and his two friends Berger (Ragni) and Sheila. After various songs extolling the various practices and issues afoot (Colored Spade for racism, Hashish for drug use, Sodomy for alternative sexuality, Ain't Got No for the tribe's semi-deliberate poverty), making it clear that this is a Divided States of America due to the differing values between generations. This is underlined when the play does a Smash Cut to the entire tribe having an orgy (yes, onstage) and the maid walks in. Claude is promptly berated by six cast members representing his parents, each one with a different costume and concern (we said it was experimental), and is told that he should join the army. He leaves, and (after another couple of songs) returns to admit that he passed his draft physical and may be forced to go fight in The Vietnam War.

A man in drag comes in. He leaves again after singing a very high song about peacocks and flashing the audience, and the tribe calls him Margaret Mead

. (This was a Shout-Out at the time, though it looks like a Big-Lipped Alligator Moment today.) The tribe is then invited to a "Be-In", where the male members of the tribe burn their draft cards... All except Claude, who gets some quality angst out of whether he ought to or not. At this point, the tribe (or at least those actors in it who have chosen to do so) emerge naked on stage (we said it was scandalous), inviting the remaining cast members, and audience, to partake in "beads, flowers, freedom, happiness." Then a cop comes in and arrests everyone in the theatre on charges of obscenity. The tribe flees and the act ends.

When the play resumes, there's a short skit where tribe members act out what Claude's draft interview must've been like. Berger then gives Claude a hallucinogen, and most of the act is dedicated to depicting, on-stage and with frightening accuracy, Claude's resulting Mushroom Samba (we said it was experimental), which involves: a roll call of important historical figures; an Abraham Lincoln played by a black woman ("Shit, I ain't dyin for no white man!"); a slapstick comedy sequence in which some Buddhists get killed by some Catholic nuns, who get killed by some astronauts (with Frickin' Laser Beams), who get killed by some Chinese, who get killed by some Native Americans, who get killed by some Green Berets, who all kill each other, and then everyone gets up and plays like children until it gets violent and they all kill each other again. About this time Claude decides reality would be better and snaps out of it, having decided that he wants to be "a spirit invisible." That is what he becomes: the tribe holds an anti-war protest, but can't see Claude because he has succumbed to the draft. He is shielded from the audience's eyes while the closing number goes on, eventually revealed to be lying dead on the ground, at which point he is covered with a black cloth. The cast reprises the final number and invites the audience to come up on stage and dance with them.

The film version ends on a particularly Dark Reprise with a shocking ending, while the play ends on The Un-Twist. Various productions use various songs and elements, and being done by hippies, the production was continually tweaked and improved upon.

Audiences and critics loved the show, partially because it averted or subverted many of the era's most dominant tropes (and, for that matter, many of theatre's most dominant tropes; among other things, the set was minimal and there were no curtains whatsoever). It did what it wanted to, and it worked. Plus, for all the shock and outrage it inspired — hey, there's No Such Thing as Bad Publicity. It was not only the first Rock Musical, directly preceding shows like RENT and Spring Awakening, it was the first Concept Musical too (in which the central theme of the show is more important than the show's narrative), which culminated in A Chorus Line in '75. Good Morning, Starshine and Aquarius/Let the Sunshine In got some respectable airplay as singles. Most importantly, it helped revive the flagging theatre scene and completely rewrote the common perspective of what you could get away with onstage.

The original musical Hair and stage adaptations provide examples of the following tropes:

The Miloš Forman film (1979) provides examples of the following tropes: