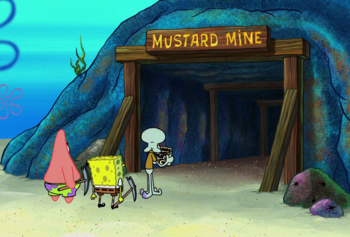 It also contains veins of mayonnaise, ketchup and hot sauce.
Gus: Finally, all third, fourth and fifth graders will spend a portion of each recess helping to dig a cookie mine at the far end of the playground!
Advisor: But why would there be cookies in the ground, your majesty?
Gus: Are you contradicting me?!?
Advisor: Oh, of course not, your majesty, no!
— Recess, "King Gus"
Advertisement:

Mining seems to be a bit romanticized in fiction, from the idea of being able to strike it rich with one lucky stroke, to the horror of thinking that you might have to stay the rest of your life inside a mine working for an evil overlord. Since mining seems to be so interesting, any resource the characters need will be mined from the ground. Any resource.

A Comedy Trope in which an off-beat setting includes mines, wells or springs for substances that do not actually occur naturally in the Earth's crust (but that do exist; Unobtanium mines don't count. Neither do mines that are named after something abnormal, but are still normal mineral mines.) Foodstuffs are particularly common.

If the entire landscape is built of food, it's Level Ate. Compare to Grows on Trees.