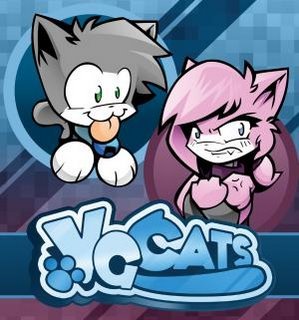 is a video game-themed Funny Animal webcomic by Scott Ramsoomair. Rather than directly emulate the Two Gamers on a Couch format that was popularized by Penny Arcade, this comic instead does humorous parodies of video games and anime with the main characters, Cloudcuckoolander Leo and Snark Knight Aeris.

The comic follows a gag-a-day format focused on Deep-Immersion Gaming segments, along with some strips set in Leo and Aeris' world. The main duo are occasionally joined by a small cast of recurring characters that includes the hapless superhero PantsMan, the serial Fan Boy Ternaldo, Doctor Hobo, and Krug the demon.

Ramsoomair spun off two subcomics: Adventure Log (2007), based on Final Fantasy XI, and Super Effective (2008), an Affectionate Parody of the plot of Pokémon FireRed and LeafGreen.

VG Cats was launched on 1 September 2001, averaging 25 comics per year at its peak. Updates fell off throughout the 2010s and the comic officially ended in February 2022.