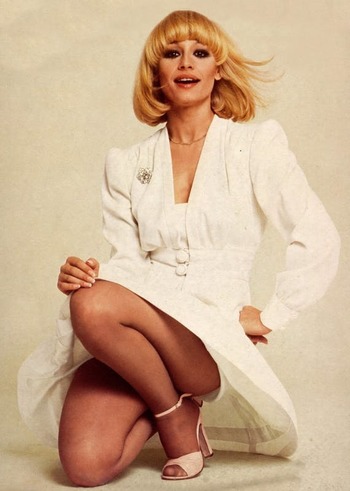 Certified Italian blonde bombshell.
Com'è bello far l'amore da Trieste in giù!note "How beautiful is to make love from Trieste down!"
—The refrain of Tanti auguri

After starring in several movies in the '50s and the '60s (including one directed by Mario Monicelli), she started singing and dancing in various variety shows. She became instantly famous thanks to the elaborate coreographies of her exhibitions, the unforgettable tunes she sang and her iconic style, which was seductive but never vulgar. She's also been the Ur-Example of Bare Your Midriff for Italian television.

She was a popular figure in many countries, especially in Latin America, but also Spain, Germany and Russia (she was famous even in the former Soviet Union).