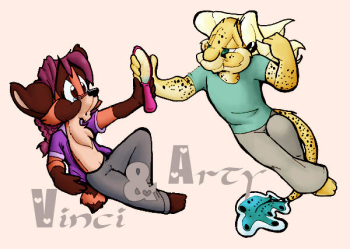 Vinci and Arty is a Slice of Life Furry Web Comic created by Candy DeWalt. It focuses on the lives of a gay male couple, Richard "Vinci" Nicolaides (Gratuitous Greek: Ριχάρδ Νικολαΐδης) and Artisan (Arty) P Sunspot, living in the fictional town of Ballpointe, Pennsylvania. Consult your physician before attempting to read this webcomic, and have your dentist on speed-dial.

On December 8th, 2013, the comic was restarted, with old strips starting from the very beginning posted on Sundays (and later a Sunday/Thursday schedule) along with a commentary on each one. A sequel comic called Stupid Fortune Cookie began running in late 2016, and picks up several years from where the original left off.

The archived strips can be found here,