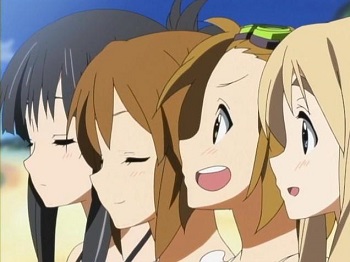 You got a purty mouth
"Like the majestic flounder, some characters have features that drift to the side of their head. Side-mouth is how to avoid lip and chin motion when animating on the cheap. It's not a style or a good excuse to avoid learning to draw expressions in profile.''
— Lackadaisy Notes on Expressions! (of the face-type kind)

In larger budget productions, there's sometimes a dedicated animator just for the lips of characters, due to the squash-and-stretch aspect of the face deforming on a cartoon character. In cheaper animation, artists will use tricks to minimize the amount of distortion to the face, so you just animate a mouth moving on a static face.

The problem occurs when you see characters in profile (that is, when they're facing to the side of the camera, so you see half of their face), since the face should be animated. Lower budget cartoon (especially anime) artists sometimes tend to actually show the (already small) mouth from a 3/4ths viewpoint, even if the face and lips are still in profile. Since small noses often require drawing them to a point, this creates a weird flounder/Picasso effect or 'snout' as the character's mouth is no longer centered but completely on the side of the face.

This is understandable for animation, as it's a budget saver and makes production go faster. This trope becomes artifactual in other media, specifically comics. Despite the fact this trick is really necessary only in a moving picture medium, a fair number of amateur artists do this, either due to inexperience, laziness, or adherence to the visual trope (in which case it's no longer a sign of sloppiness, but rather part of the style). This effect can be averted by simply avoiding profile altogether and doing 3/4 points of view instead. When it comes to time savers, some artists will cite preference for this kind of drawing with other shortcuts such as the Pac-Man mouth.

Notice that Cricket's mouth suddenly moves to the right cheek when he talks when viewed from the side.

Notice that Cricket's mouth suddenly moves to the right cheek when he talks when viewed from the side.