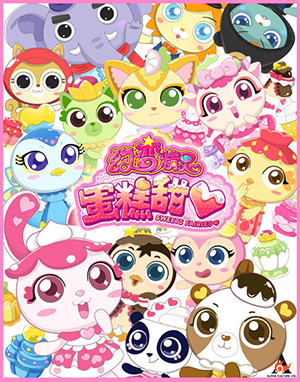 Apparently one day at the headquarters of Auldey, the creators of Blazing Teens and Armor Hero were discussing what series they should do next for the younger girl crowd. Eventually the executives were researching and watching a lot of Anime and decided "Hey! Let's do something such as crossing cakes and animals together akin to Zoobles and throw our twist in it." And with much funding from the Chinese government they managed to do a lot of research and development for the entire thing.

And, well, from all that, Sweets Fairy was born.

Probably one of China's first ever Ridiculously Cute Critter‎ oriented series and Auldey's second Magical Girl series after Balala the Fairies‎, Sweets Fairy (original title "幻变精灵之蛋糕甜心", or Magical Fairy Sweetheart Cake), known also as Vary Peri, is a series involving fairy animals who turn into cakes and then transform into magical girls (or boys). This is pretty much an unholy offspring of Zoobles and Jewelpet with loads and loads of LSD-infused Sugar Bowl goodness. A Merchandise-Driven property, the series has had a few toys released in its televised run in China and today they are still sold online.

The story follows Mousse Benetta, a strawberry mousse cake rabbit who happens to be the princess of the kingdom of sweets and is about to become the next queen. However she doesn't actually care for being the next queen as all she wants is to taste the best cake ever made, but the problem is that she lost her sense of taste. Her trusty adviser, Lyan, told her to search for the "Delicious Miracle" power in a village to cure her loss of taste. She agreed to go to the village, but only for him to take the power for himself.

When she arrived at the village she had an unexpected meeting with Mocha Dennis, and her life starts to turn upside down as they develop a rather bittersweet friendship with each other. And she also discovers that she has a hidden ability that can turn her into a Magical Girl, after eating some delicious cake.