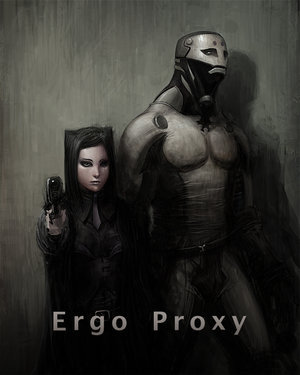 This 23 episode sci-fi anime from Manglobe is set in a ravaged, blasted future where humans have confined themselves to domed cities in order to survive. Ergo Proxy is the story of an amnesiac immigrant named Vincent Law and the intelligence operative Re-l Mayer, as they are caught up in the tangled web of secrets surrounding the city of Romdeau and the truth behind the chaos. Central to all of this is the nature of the utopia of Romdeau and the powerful, mysterious monsters known as Proxies.

Ergo Proxy is notable for its beautiful animation as well as its love of Mind Screw. It contains elements of Post-Cyberpunk, steampunk, and Film Noir; and draws motifs from psychology and philosophy.

Ergo Proxy has examples of::