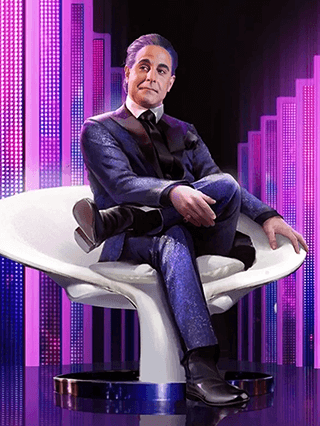 A related trope to Kent Brockman News (or Immoral Journalist) and Hates the Job, Loves the Limelight, this is the game show or sport event counterpart. You know the type, preening, narcissistic, slicked hair and an equally slick personality. He will crack lots of jokes of the Witty Banter type, but you always suspect he's really a Jerkass, and you're often proved correct in that assumption.
Advertisement:

When used in an actual broadcast, this tends to go best when said host is schooled enough in Self-Deprecation to realize that he comes off as this, and uses it to make more jokes, in which case he's often a Jerk with a Heart of Gold.