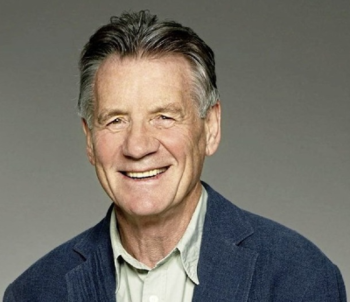 "Michael is the one that all of us [Pythons] like."
— Terry Gilliam, Monty Python: Almost the Truth (Lawyer's Cut)
Advertisement:

Sir Michael Edward Palin KCMG CBE FRGS FRSGS (born 5 May 1943 in Ranmoor, England) is an English comedian, character actor and author, most famous for being one of the members of Monty Python.

His career after Python has included writing and starring in his own films, The Missionary and American Friends, as well as frequent collaborations with fellow Python alumni: Terry Jones (as creators of the hilarious TV subversion of traditional British adventure stories for boys, Ripping Yarns), John Cleese (as costar of the hugely successful film A Fish Called Wanda and its semi-sequel Fierce Creatures) and Terry Gilliam (as co-writer and -star of Time Bandits and in a starring role in Gilliam's solo magnum opus Brazil). Most recently, he has dabbled in Eric Idle's Python stage projects, taking a few cameo roles in Not the Messiah (He's a Very Naughty Boy). In 2017, he starred as Vyacheslav Molotov in The Death of Stalin.

He has also written voluminous personal diaries (published in three volumes of about 650 pages each, covering 1969-1979, 1980-1989 and 1989-1998 respectively), various children's stories and two novels, Hemingway's Chair and The Truth, in addition to an historical work, Erebus: The Story of a Ship.

Post-Python, he's best known for a series of epic travelogue series filmed for The BBC. These have taken Palin to dozens of countries on all seven continents, prompted a series of best-selling companion books based on his on-the-spot notes, and led to the so-called "Palin Effect", whereby places he's visited report a massive increase in tourism. They were also responsible for his 2009 appointment to a three-year term as President of the UK's prestigious Royal Geographic Society and the very first Louie Kamookak Medal from the Royal Canadian Geographical Society for "achievements in geography".

The travel series so far:

Alongside these series, Palin's also published books about his trips. Adapted from his travel diaries, they provide deeper personal insights of the locations, transportation, and people he encountered as well as behind-the-scenes stories that detail each trip's daunting logistics and how he and the crew overcame them.

In 2013 he was made a BAFTA Fellow (essentially, a lifetime achievement award) for his distinguished contributions to multiple media. He was knighted in 2018, specifically to the Order of St. Michael and St. George, which is awarded for overseas non-military service to the United Kingdom.

Also, is definitely not Eric Idle. No matter what either of them claim.

Tropes relating to his career:

His travelogues provide examples of:

I never wanted to be a Troper. I don't want to keep editing the site! I wanted to be... A LUMBERJACK!