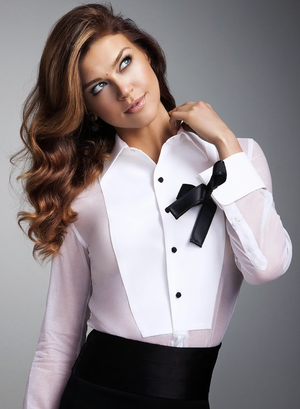 She's notable for regularly showing up in television and film with roles on Supernatural, Legion, and John Wick, among many others.

Palicki also has quite a history with comic book adaptations, having been cast as a false Supergirl on Smallville, the villain of a failed Aquaman television pilot at The WB, and NBC's Wonder Woman pilot as the title character. She also showed up in G.I. Joe: Retaliation as Lady Jaye.

She played Barbara "Bobbi" Morse / Mockingbird on Agents of S.H.I.E.L.D. from 2014 to 2016, and plans for a Mockingbird-centric Spin-Off were discussed. Eventually a pilot episode, Marvel's Most Wanted, featuring her character in the lead role, was ordered, but did not develop it as a series. She soon landed on her feet, however. As an experienced genre actress and a longtime friend of Seth MacFarlane, she was his natural choice for the female lead, Cmdr. Kelly Grayson, on The Orville, which began its run in 2017. In May 2019, she married her Orville costar Scott Grimes, but filed for divorce just two months later. They reconciled not too long after, but Adrianne filed again in July 2020. Reportedly, they remain friends.

In addition to her acting career, Palicki co-wrote the comic book No Angel (published by Black Mask Studios) with her brother Eric, and doubles as the visual inspiration for its lead character.