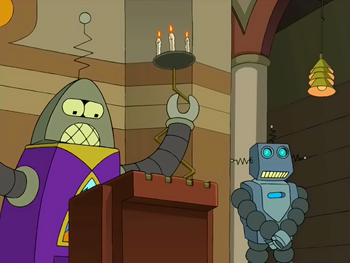 "I see a lot of fancy robots here today. Made of real shiny metal. But that don't impress the Robot Devil!"
Fry: So, what's the deal? You guys don't believe in Robot Jesus?
Rab-bot: We believe that he was built, and that he was a well-programmed robot, but he wasn't our messiah.
— Futurama ("Future Stock")
Advertisement:

Basically, robots who have their own religion. For robots who are Christians or Hindus or followers of any other human religion, see instead Religious Robot. (And Fantastic Religious Weirdness.)

An interesting trope to play with. It can imply a lot of things: a direct link between sapience and religion, a shape of religion if it was formed by a perfect logic, a Take That! at organized religion if things that have clear, well-understood materialistic origins still believe in the supernatural, or something else entirely.

Two most popular scenarios are robots worshiping their creators or a Deus Est Machina. Compare Animal Religion. When it's someone else basing a religion around robots, it's Machine Worship.