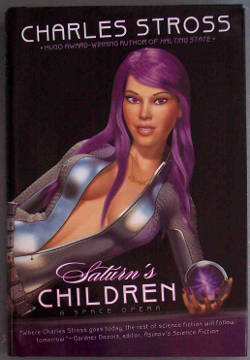 Saturn's Children, and its sequel Neptune's Brood, are a pair of science fiction novels by Charles Stross, set in a universe where humanity has gone extinct and our robot descendants are the dominant civilization.

By the 23rd century Mankind has died out, leaving the intelligent robots they created to carry on as best they can. Independent and self-sustaining, the robots struggle to find purpose in their "lives". Freya Nakamichi is one of these robots: created as a Sex Bot, she now has no reason to exist (seeing as there are no more humans around to sex up). While visiting Venus, Freya gets into trouble with some high-ranking robots. With things getting too hot for her, Freya is thankful to find a courier job that will take her off-planet. Unfortunately, the package she's carrying turns out to contain a secret that many robots would kill to possess...or die to destroy.

There is a story, "Bit Rot", which bridges the gap between the two novels. It can be read here