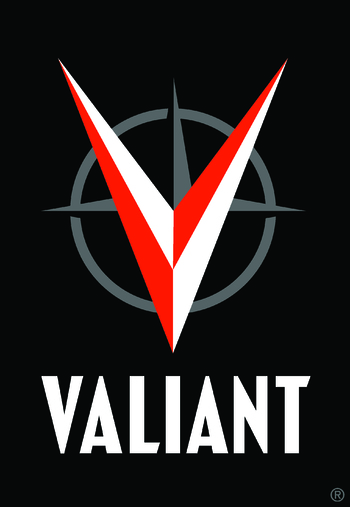 Valiant Comics was formed in 1989 by former Marvel Comics Editor Jim Shooter, along with top artists and writers. Valiant was one of the many "creator owned" comic companies that appeared during the Dark Age. The principal idea behind Valiant was to out-write the competition. It did so by deconstructing the various aspects of the typical comic book universe as presented by its rivals. While DC, Marvel, and Image focused more on art, Valiant concentrated on aspects like exploration towards characterization, upholding continuity, and justification behind superpowers.

All of Valiant's characters' powers come from either technology, Psychic Powers, or magic. Thus they reduced the need for Applied Phlebotinum, allowing them to pursue a more Hard Science Fiction approach than would have been possible in the established universes of DC or Marvel. Their cast of heroes combined characters based on old pulp-style adventurers with more modern character types. Valiant also bought the rights to and revamped a few old characters from Gold Key Comics, with interesting results.

Perhaps the biggest innovation was their use of continuity. The events in the comics almost always took place during the same time frame as publication with readers expecting one month time jumps between issues. There was the rare exception to this rule, such as two back-to-back issues covering the events of the same night. In this case, the narration box would date them — for example, both issues would be dated "December 12th, 1991" if the event began in a December issue released on the 12th. Another method they used took advantage of the more hard scifi setting, and had characters experience a jump forward of several months as a side effect of traveling faster than light. An event in one comic had immediate and lasting effects in another. Once an event happened, it was set in stone. RetCons never happened, and Comic-Book Time was averted. The Valiant universe was split into two time periods: the modern day, and the 41st century, with events in the former having effects on the latter. All in all, the formula worked, attracting many fans with its refreshing and unique style, and Valiant sold over 80 million comics in its first 5 years, becoming the third highest selling comic book company (after, of course, Marvel and DC)...

...until 1993, when Valiant did an ill-thought-out crossover with Image called Deathmate. Valiant's professionalism clashed brutally with Image's notorious Schedule Slip, and Valiant and Image's writers had no clue how to write the other company's characters. Both companies saw their reputations in tatters. Deathmate is widely believed to have been the straw that broke the comic book industry's back, setting off the comics crash that the industry is still recovering from.

Valiant's sales started to slip and, after an ill-considered Birthquake revamp, Valiant was bought out by Acclaim Entertainment, a then-popular videogame company. The line, renamed "Acclaim Comics," introduced a brand-new, "more marketable" universe dubbed Valiant Heroes 2. The buyout led to videogame adaptations, most notably Turok but also more obscure ones like Armorines and Shadow Man.note Funnily enough, this was not Valiant's first foray into the world of game comics - one of the ways in which they made sure they got bread alongside the meat of their original stuff was doing licensed Nintendo comics under the Nintendo Comics System, which may be where Acclaim got the idea to acquire them from. Ultimately, though, the declining fortunes of Acclaim Entertainment and Executive Meddling led to the line's slow and painful demise. The original Valiant is still fondly remembered as one of the best companies of the Dark Age.

Dark Horse Comics briefly held the license all the Gold Key properties — and hired Shooter to manage them — but, unfortunately, after about 8 issues of each, Dark Horse announced they would be cancelling the line due to low sales, as well as the rights holders wanting too much money. The Gold Key heroes most recently are licensed to Dynamite Entertainment, which has for three years been trying to give them a comeback...and has rebooted them at least three times as the characters keep switching ownership. (Classic Media got bought by DreamWorks Animation, which got purchased by NBCUniversal.) This is a factor on why Valiant Entertainment takes a dim view towards trying to obtain characters rights again. Under such conditions it's difficult to get any creative momentum.

In 2012, the renewed Valiant Comics, now called Valiant Entertainment, announced they would be publishing comics starring the Valiant characters, starting with four series in 2012. These would start with X-O Manowar #1 in May, followed by the release of new #1's for Harbinger, Bloodshot, and Archer & Armstrong in June, July and August, respectively. Valiant made the promise of more titles depending on the performance of the initial four series, which debuted to strong initial sales and positive reactions from critics. Valiant made good on their promise in November 2012, with a new #1 of Shadowman. The company's first major event, Harbinger Wars, took place in Summer 2013, crossing over Harbinger and Bloodshot.

In 2014, Valiant Entertainment partnered with Catalyst Game Labs to publish an Tabletop Role-Playing Game called Valiant Universe The Roleplaying Game based on their comic book series.

In 2015, they also announced they were partnering with Columbia Pictures in order to create a Valiant Cinematic Universe. The current line-up for the setting is to have a pair of Bloodshot films, a pair of Harbinger films, and a Harbinger Wars film that leads to a crossover between the two film series. According to leaked e-mails from Sony, the company was apparently considering retooling the script for Roland Emmerich's Singularity to serve as a prequel. A Bloodshot film was released in 2020.