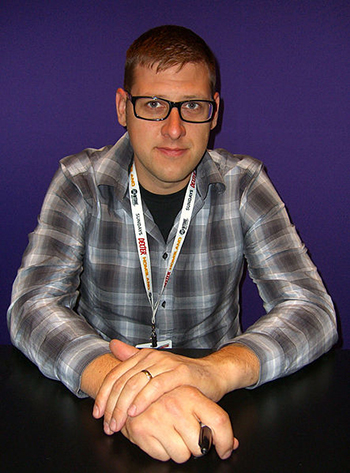 Jeff Lemire (born March 21, 1976) is a Canadian comic artist and writer, most famous for his Vertigo Comics series Sweet Tooth and his work in various DC Comics titles. He rose to prominence by writing the Top Shelf published Essex County Trilogy and later joined Vertigo Comics to publish Sweet Tooth. He was then offered Adventure Comics and Superboy.

As part of the DC New 52 Relaunch, Jeff Lemire handled writing duties for Animal Man and Frankenstein: Agent of S.H.A.D.E, and later took over Justice League Dark and Green Arrow, all to much critical acclaim.

Following the end of his exclusive contract with DC, he's taken a variety of projects including Bloodshot for Valiant Comics, and Hawkeye for Marvel Comics.

Similar to Geoff Johns, Jeff Lemire has specialised in mining relatively obscure characters from DC history or "silly" concepts, and re-formatting them to fit with modern audiences; for the most part, he's been very successful.