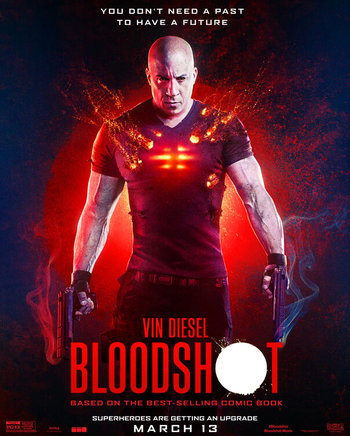 "I'm going to find the man who murdered my wife and kill him."
"At RST, we rebuild the most important assets in the US military. Soldiers, like yourself. You’re the first who we’ve successfully managed to bring back, but improved, enhanced. With the technology in your veins, you have an army inside you, that will not only make you stronger, it will heal you instantly."
— Dr. Emil Harting
Advertisement:

Bloodshot is a superhero film based on the Valiant Comics character of the same name directed by David S. F. Wilson (in his feature directorial debut), written by Jeff Wadlow and Eric Heisserer. The film stars Vin Diesel as the titular antihero alongside Eiza González, Sam Heughan, Toby Kebbell, Guy Pearce, Lamorne Morris and Talulah Riley in supporting roles.

After he and his wife are murdered, Marine Ray Garrison (Vin Diesel) is resurrected by a secret team of scientists. Enhanced with nanotechnology, he becomes a superhuman, biotech killing machine – Bloodshot. As Ray first trains with fellow super-soldiers, he cannot recall anything from his former life. But when his memories flood back and he remembers the man that killed both him and his wife, he breaks out of the facility hellbent on revenge, only to discover that there’s more to the conspiracy than he originally thought.

The film was released in theaters on March 13, 2020. However, due to the effects of the coronavirus pandemic, the movie was made available for purchase for video-on-demand on March 24 as theater chains began to shut down to prevent the spread of the disease.

"You turned me into a weapon, and now it's pointing at you."