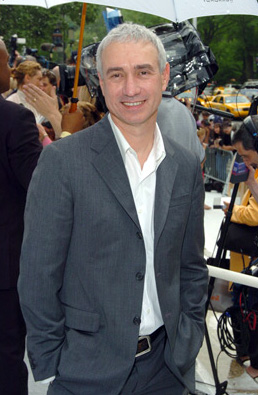 "I'm a filmmaker, not a scientist."
— Roland Emmerich, justifying the copious amounts of Artistic License in his oeuvre.
Advertisement:

In a World…... where B-Movies end up on the nadir of video store shelves... one rich man... dares to make them awesome.

Roland Emmerich (born November 10, 1955) is a German director and producer who is the undisputed king of American Disaster Movies in the past thirty years or so. He's known for blowing up the White House, among other things. Although his films have a tendency to get mixed reviews, he makes films that absolutely kill at the box office and they are usually enjoyable in their own rights.

He became interested in film after seeing Star Wars in 1977 (like many others), and attended the University of Television and Film in Munich. His early films are generally unknown by most audiences, but were praised in his home country. His first film was Das Arche Noah Prinzip (The Noah's Ark Principle), about a space station that could be used to control the weather, which holds the record for Germany's most expensive student film (about 1.2 million DM). He made several further B-movies in Germany that are borderline unknown; Joey, Hollywood-Monster and Moon 44; one of which featured one of his frequent collaborators in scripting, Dean Devlin.

In The '90s, he traveled to Hollywood to direct his first blockbuster: Universal Soldier. While it received less-than-kind reviews, the film made a decent amount of money in the USA, and made over twice the amount of money overseas. After this, he directed Stargate, which later kicked off its own TV series and franchise, and opened him the door to direct bigger and bigger films, with his most notable box office hit being Independence Day.

Emmerich is openly gay, and in 2006, he pledged $150,000 to the Legacy Project, a campaign dedicated to gay and lesbian film preservation. Emmerich made the donation on behalf of Outfest, making it the largest gift in the festival's history. He owns homes in Los Angeles, Manhattan, London and Stuttgart. He likes to decorate his homes in a self-described "outlandish" manner, adorning them with rare Hollywood memorabilia, murals and portraits of dictators and Communist figures, and World War II-era relics. His extensive collection of artwork includes a painting of Jesus Christ wearing a Katharine Hamnett-styled t-shirt during his crucifixion, prints of Alison Jackson's works of a Princess Diana lookalike making obscene gestures and engaging in sex acts, a wax sculpture of Pope John Paul II laughing as he reads his own obituary, and a Photoshopped image of Iranian president Mahmoud Ahmadinejad in a homoerotic pose. His three favorite movies are The Poseidon Adventure, The Towering Inferno and Earthquake, all disaster movies. note Probably not coincidentally, the first two films were produced by Irwin Allen, to which his work is often compared.

MSTK3 Mantra is in full effect here. Don't try thinking about inconsistencies, internal and external, in his movies; you'll enjoy them more that way.

Compare Michael Bay. If they collaborated, Hollywood would explode.