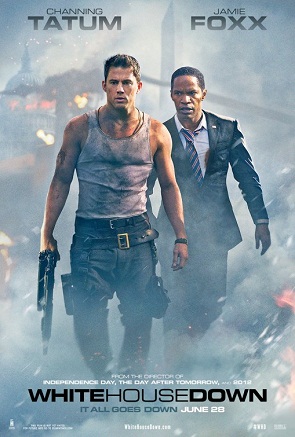 Reporter: Oh my God, that's President Sawyer! He has a rocket launcher!
Kelllerman: Well, there's something you don't see every day.
Advertisement:

John Cale (Channing Tatum) is a US Capitol Police officer who is trying to impress his young daughter by letting her join him at the White House during his job interview for a position on the President's security detail. Unfortunately, a paramilitary group attacks the White House during their tour, and when most of the Secret Service ends up dead and the tourists end up being taken hostage, there's only one dude bad enough to save the President (and a bunch of other people too). The President himself (Jamie Foxx) is pretty badass, too.

The direct competitor to Olympus Has Fallen. Compare and contrast it.

This movie has sensitive plot twists. You Have Been Warned.

Independence Day made destroying monuments cool, and White House Down brought it back.

Independence Day made destroying monuments cool, and White House Down brought it back.