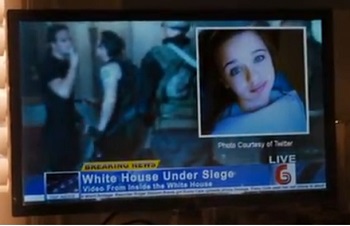 The name and picture of a hostage currently being held by terrorists who watch the news. Great going.
Thornberg: The people have the right to know everything about everybody. You got in the way of that.
Holly: Listen, buster, you endangered my children. And you didn't do it for anything as noble as the people. The only time you see the people is when you look down to see what you're stepping on.
— Die Hard 2
Advertisement:

The news media is an important source of information for the general public about crises foreign and domestic. Unfortunately, the bad guys happen to be members of the general public, and at times, the media can give them important information that the rest of us would rather they not know. Maybe it was the name of a potential hostage that the antagonists can use. Perhaps a rescue attempt was spoiled by the news. Maybe it's an important MacGuffin that will come in handy. In any case, things just got a lot harder for the protagonists. This is a common tactic of the Immoral Journalist.

Despite the above, this trope does not apply to villains only. It applies in any case where someone gains and acts on information gained from watching or reading public news, blogs, etc.

Related to Unwitting Instigator of Doom, Learned from the News,and If It Bleeds, It Leads. See also Coincidental Broadcast, Loose Lips, Taught by Television, and Saying Too Much. Not to be confused with Is This Thing Still On? and Engineered Public Confession when the very guy holding his own secrets accidentally says it publicly. This may overlap with Social Media Is Bad when the broadcaster uses social media rather than more traditional media outlets.

Contrast Information Wants to Be Free when broadcasting of secrets is a good thing.