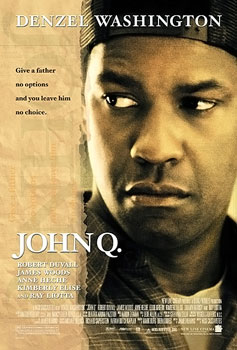 John Q. is a 2002 crime film directed by Nick Cassavetes and starring Denzel Washington as the eponymous John Q. Archibald, a father whose son has just fallen victim to a terrible heart condition, which requires a transplant within a fairly short amount of time. Unfortunately for John, he soon finds out that due to his company's change in health coverage, his HMO will not allow compensation for the procedure. After expending all his other options in attempts to find financing for his son's operation, John makes a desperate choice by holding a hospital emergency room hostage until he is guaranteed an operation for his son.