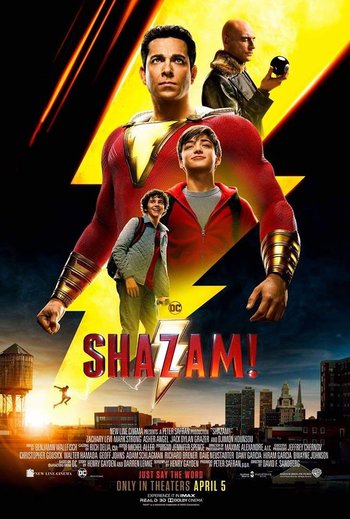 Just say the word.
"A superhero who can't save his family isn't much of a hero."
— Billy Batson
Advertisement:

SHAZAM! is a 2019 superhero comedy movie based on the DC Comics superhero of the same name (once known as Captain Marvel). It is the seventh film to be set in the DC Extended Universe. Unlike the other entries of that setting which are produced by Warner Bros.' main unit, it is produced by their subsidiary New Line Cinema. It was written by Henry Gayden and directed by David F. Sandberg, of Lights Out and Annabelle: Creation fame.

Billy Batson (Asher Angel) is a 14-year-old foster kid who wants nothing to do with his new group home in Philadelphia — all he wants is to find his mother after they were separated at a country fair when Billy was a young child. But one day, after defending his foster brother Freddy Freeman (Jack Dylan Grazer) from a pair of bullies, he finds himself summoned by the ancient wizard Shazam (Djimon Hounsou). In need of a successor, the wizard grants Billy the ability to transform into an adult superhero (Zachary Levi).

Now endowed with amazing magic powers, Billy enlists Freddy's aid in learning the ropes of superheroics, reveling in the fun he can have with his powers and the fame it brings him. But it's not all fun and games, as Billy soon finds himself targeted by the demonic forces of the Seven Deadly Sins and their sinister champion, Dr. Thaddeus Sivana (Mark Strong).

The Captain Marvel/Shazam mythos has been in the comics since the 1940s; however, the movie is actually an adaptation of Geoff Johns' Shazam! (2012) reboot in 2012 that was a backup feature in the Justice League comic, and subsequently collected into its own graphic novel. Although Johns' story clearly draws from Shazam's rich history, it is a fresh take on the character and it is this interpretation that serves as the basis for the movie.

Shazam!, the 70's TV show, is another take on the character, but based from the then-current comics, and does not share any continuity with the film. Ditto for the 1941 film serial under his original name, Captain Marvel. Because the Marvel Family had been written out of the 1974 series and came after the 1941 one, it marks the first live-action appearances of Freddy Freeman and Mary Bromfield as well as the later expansion-team members of the family.

The film was released on April 5, 2019. A sequel, titled SHAZAM! Fury of the Gods, has been announced for release on December 21, 2022. Confirmed casting for the sequel includes Rachel Zegler (West Side Story) in a key role and Helen Mirren & Lucy Liu as villains named Hespera and Kalypso. Before that, a prequel spinoff, Black Adam, will be released on October 21, 2022. Dwayne Johnson will produce and star as the title character of that film, having already executive produced this one.

The Seven Deadly Sins are a group of demons long imprisoned by the Council of Wizards in the Rock of Eternity for their destructive influence, now working under Doctor Sivana to eliminate Shazam's Champion.

The Seven Deadly Sins are a group of demons long imprisoned by the Council of Wizards in the Rock of Eternity for their destructive influence, now working under Doctor Sivana to eliminate Shazam's Champion.