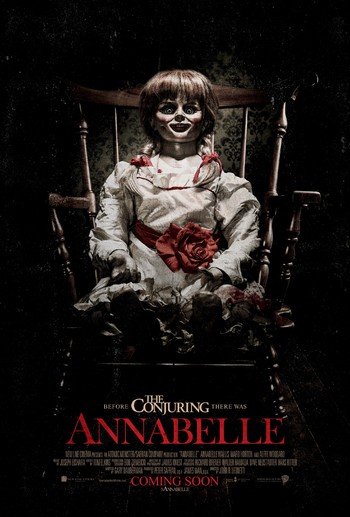 Before The Conjuring, there was Annabelle.
Advertisement:

Annabelle is a 2014 American supernatural psychological horror film directed by John R. Leonetti (Mortal Kombat: Annihilation), produced by James Wan, and written by Gary Dauberman. The second film to be set in The Conjuring Universe, it is both a prequel to and Spin-Off of The Conjuring. The film stars Annabelle Wallis, Ward Horton, and Alfre Woodard. It was released worldwide on October 3, 2014.

John Gordon has found the perfect gift for both his pregnant wife Mia and their unborn child—Annabelle, a beautiful and rare vintage doll in a pure white wedding dress. Unfortunately, the family's delight with the doll is shortlived. On one horrific night, their home is invaded by members of a satanic cult, who violently attack John and Mia. Spilled blood and terror are not all they leave behind. The cultists have conjured an entity, which is so malevolent that nothing they did will compare to the sinister conduit to the damned that is now Annabelle.

The film got its own prequel in 2017 called Annabelle: Creation. A sequel to the first film, titled Annabelle Comes Home, followed in 2019.