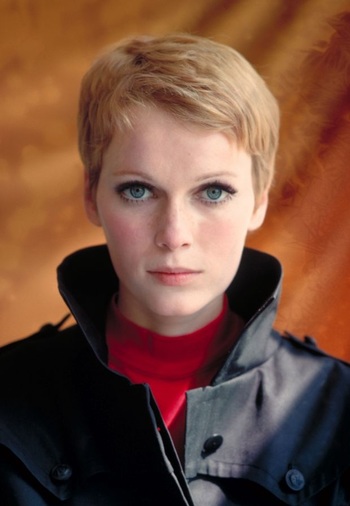 "I get it now; I didn't get it then. That life is about losing and about doing it as gracefully as possible... and enjoying everything in between."
Advertisement:

The daughter of film director John Farrow and actress Maureen O'Sullivan, she first gained notice in The '60s for her role as Allison MacKenzie in the television soap opera Peyton Place, her short-lived marriage to Frank Sinatra, and her role as Rosemary Woodhouse in Roman Polański's Rosemary's Baby (1968). She went on to appear in several films throughout The '70s, such as The Great Gatsby (1974) and Death on the Nile (1978).

Farrow is also known for her extensive work as a UNICEF Goodwill Ambassador, being involved in humanitarian activities in African countries.

Her son, Ronan Farrow, (whose father, according to Mia's own comments, is either Woody Allen or Frank Sinatra) is notable for his journalism work on sexual abuse allegations in Hollywood, helping to kickstart the #MeToo movement. Mia's sister, Prudence Farrow, is also notable for being the subject of The Beatles song "Dear Prudence" from The White Album.