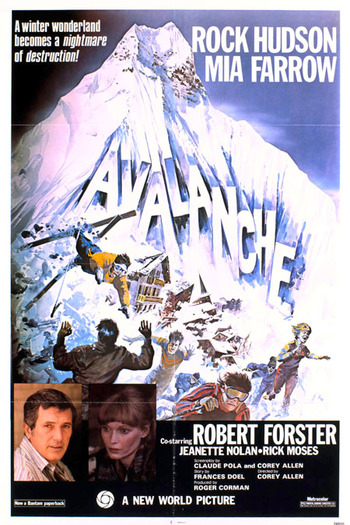 Entrepreneur David Shelby (Hudson) has fought tooth-and-nail to build a ski resort deep in the Rockies. During an especially busy time of the ski season, his ex-wife Caroline (Farrow) comes for a visit. As Shelby unsuccessfully attempts to get back together with her, Shelby's mother Florence enjoys the party life at the lodge, a star skier arrives at the resort with much fanfare, and many other characters are introduced as they have the time of their lives at the resort. But then, a lost airplane crashes into the snow that sits precariously atop the mountain, sending tons of snow onto the unsuspecting resort...

The film was a Box Office Bomb upon release; and has since gained new life as the subject of the fourth episode of the reboot of Mystery Science Theater 3000. Tropes pertaining to that episode can be found here.

that was released the same year.

Tropes found in this episode include: