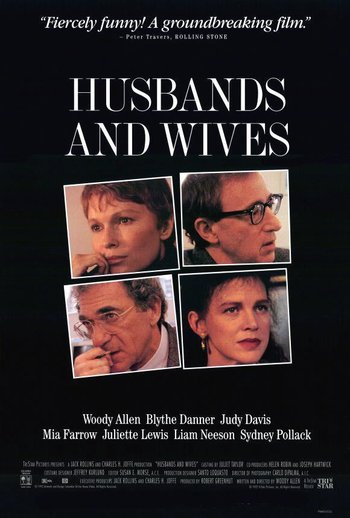 A 1992 Dramedy Mockumentary directed by (and co-starring) Woody Allen.

After their friends Jack (Sydney Pollack) and Sally (Judy Davis) split up, the marriage between college professor Gabe (Allen) and magazine editor Judy (Mia Farrow) encounters several difficulties: Gabe becomes close to one of his students, aspiring writer Rain (Juliette Lewis), while Judy takes it upon herself to introduce Sally to one of her colleagues, becoming dissatisfied when they start a relationship. Meanwhile, Jack and Sally's separation wildly ranges from amicable to hostile, when it's revealed each is jealous of the other having found a new love interest.