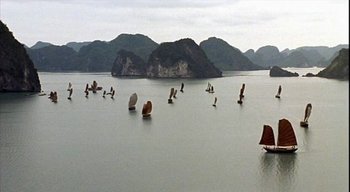 Indochine is a 1992 film from France, directed by Regis Wargnier, starring Catherine Deneuve.

It spans the years 1930-1954 and the end of French colonial rule in French Indochina, the country that would eventually become Vietnam, but most of the story takes place from 1930 to 1936. Eliane Devries (Deneuve) is a French colonialist, born and raised in Indochina, manager of and heir to her father's vast rubber plantation. Eliane is unmarried, but she is the loving adoptive mother of Camille, a Vietnamese princess orphaned after her parents are killed in a plane crash.

Eliane is not the cruelest of colonial masters but she isn't the kindest either, calling her workers "coolies" and whipping one who attempted to run away. She also has an opium habit, and fills her private time with casual sex with a variety of lovers. One of those lovers is Jean-Baptiste (Vincent Perez), a handsome young Navy lieutenant. They embark on a passionate affair that is rather more serious than Eliane's usual flings.

Eventually Eliane and Jean-Baptiste part. One day an incident involving the shooting of a runaway prisoner winds up introducing teenaged Camille to Jean-Baptiste. They become lovers in turn, much to Eliane's displeasure and social embarrassment. Eliane arranges for Jean-Baptiste to be sent away to a remote harbor post with a strong Heart of Darkness vibe to it. Camille then abandons her mother and goes off on a quest to find Jean-Baptiste. Tragedy ensues.

Not related to the music band of the same name.