Film / The Purple Rose of Cairo 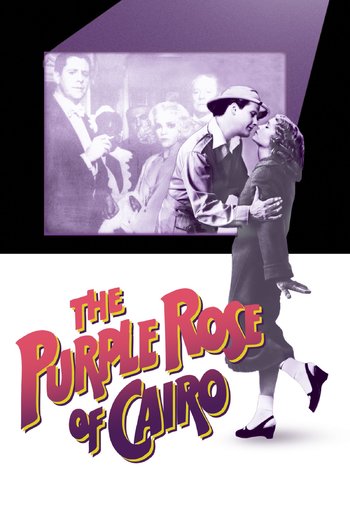 "I just met a wonderful new man. He's fictional, but you can't have everything."
— Cecilia
Advertisement:

In 1930s New Jersey, Cecilia (Farrow) is a downtrodden waitress with an abusive husband, Monk (Aiello), and little to look forward to in her daily life. She escapes her troubles by going to the movies as often as she can and getting lost in beautiful love stories. In the latest movie, The Purple Rose of Cairo, a charming archeologist named Tom Baxter (Daniels) falls in love with a glamorous nightclub singer. After losing her job, Cecilia tries to raise her spirits by going to see the film another time. Unexpectedly, Tom Baxter walks right off the screen and into Cecilia's life.

Tom's exit from the movie causes an uproar as the characters left in the film fight amongst themselves. Suddenly, Tom Baxters in other screenings are trying to leave their theaters and audiences have no idea how to handle it. Real life actor Gil Shepherd (also Daniels) is forced to track down his character Tom and convince him to go back into the movie. But Tom has fallen in love with Cecilia and she must decide whether to live a life of fantasy or reality.