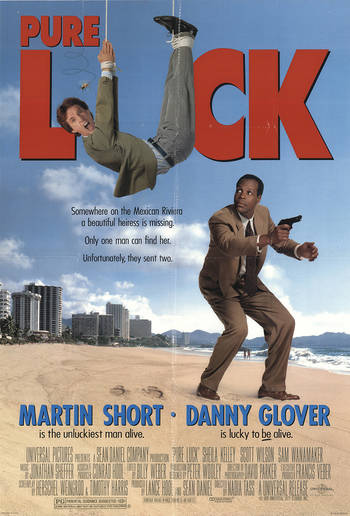 A 1991 Buddy Picture comedy directed by Nadia Tess, starring Danny Glover and Martin Short. They're hired to travel to Mexico to find a missing heiress, Valerie (Sheila Kelley), who is extremely accident prone. Glover's character, Raymond Campanella, is going because he's a professional investigator. Short's character, Eugene Proctor, is an accountant who's been sent because he also has exceptionally bad luck, and an employee of Valerie's father's believes that he might literally stumble upon her. Hilarity Ensues.

The film is a very close remake of the 1981 French film Knock on Wood (original title La Chèvre — "the goat") starring Pierre Richard and Gérard Depardieu. It was the third and last attempt to remake Richard's comedies — not the failure of The Man with One Red Shoe but still below the moderate success of Three Fugitives.