Takes One to Kill One 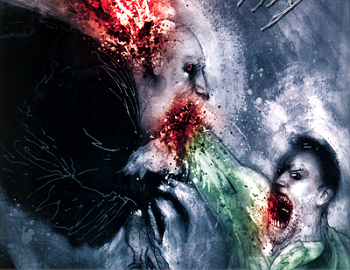 In many works of fiction, there are creatures that are Immune to Bullets, Made of Iron, and in worst-case scenarios have no Kryptonite Factor. Even nuking them has no effect. But fear not, for while these creatures may be immune to fire, bullets, nuclear weapons, and MTV, these monsters still have one weakness... Themselves, or their own kind.

There are ways on how this is accomplished:

A subtrope of Mutual Disadvantage. An opposite of Tactical Rock–Paper–Scissors where each type of combatant has some other capable of curb stomping it. However, this can be a subtrope of Elemental Rock–Paper–Scissors if an element happens to be weak against itself. Compare Beat Them at Their Own Game, Hoist by His Own Petard, and Summon Bigger Fish. Contrast Like Cannot Cut Like and Counterpart Artifacts.