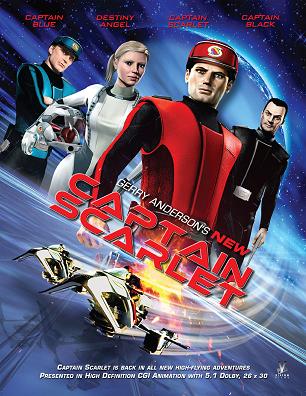 Gerry Anderson's New Captain Scarlet is a CGI Remake of the marionette show Captain Scarlet and the Mysterons, which debuted in 2005. The new series lasted two seasons (the original only lasted for one, but had six more episodes) but remains lesser-known than the original due to being Screwed by the Network.

As a nod to the original's Supermarionation format, this reboot is described as "Filmed in Hypermarionation". The basic storyline starts of the same: in the year 2068, Captain Scarlet and Captain Black discover the Mysteron City during a mission to Mars, and Captain Black opens fire when he mistakes a probe for an offensive action.

Thus the Mysterons are now retaliating on Earth with their retrometabolism power, and using Captain Black's clone as their main agent. Captain Scarlet, also recreated as an invulnerable clone, but retaining his original personality and loyalties, opposes them along with the Spectrum organization.