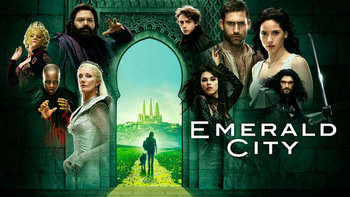 "Definitely not in Kansas anymore."
"So, are you a good witch or a bad witch?"
— West
Advertisement:

Emerald City was a 2017 fantasy television series which aired on NBC for one season. It's based very loosely on L. Frank Baum's Land of Oz books and giving a (much) Darker and Edgier spin on them.

Dorothy Gale (Adria Arjona) is a headstrong woman in her twenties who is transported to Oz, where the powerful Wizard (Vincent D'Onofrio) rules over the land after winning a Great Offscreen War and has banned magic. Accompanied by a police dog who she names Toto, Dorothy travels for the Emerald City in the hope that the Wizard can send her home. Along the way, she meets Lucas, an amnesiac man she finds tied to a post. However, Dorothy's dramatic arrival into Oz, as per the novel, leads to the death of the Wicked Witch of the East and causes fireworks in the land.

Due to low ratings the show was cancelled after one season of ten episodes.

A trailer for the series can be viewed here