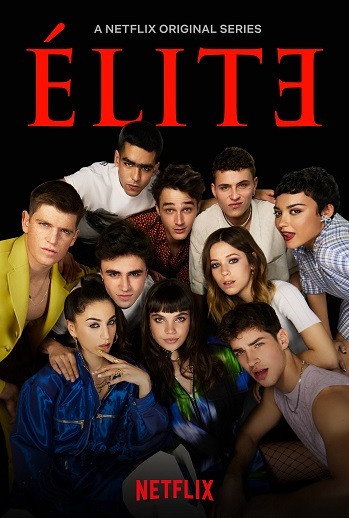 Elite is a Spanish thriller teen drama, created by Darío Madrona and Carlos Montero. The show was released world-wide by Netflix in 2018.

The show has format in which it switches back and forth between a murder investigation where several characters are questioned by the police on the murder of one of them and the past, where the story of three students from a humble, recently destroyed school get to go to a famous private school, Las Encinas, where their coming causes great disturbance in the social order of the school. Samuel, a well meaning guy falls for the rebellious daughter of a rich family, Marina; Nadia, the youngest daughter of a humble Muslim family faces prejudice on school while Marina's older brother, Guzman, and his "girlfriend", Lucrecia, try to find a way to bring her down from her pedestal; Christian, a fun loving guy finds himself in an odd new relationship when a longtime couple, Carla and Polo, bring him in the middle of them physically and emotionally.

The show was renewed for a second season, which was released on September 6, 2019. This time, a student at Las Encinas goes missing, and the mystery follows the back and forth format. A third and fourth season have also been released, with a fifth on the way. Welcome To Eden 2022

Not to be confused with the video game Elite.

Due to the nature of the show, all spoilers will be unmarked