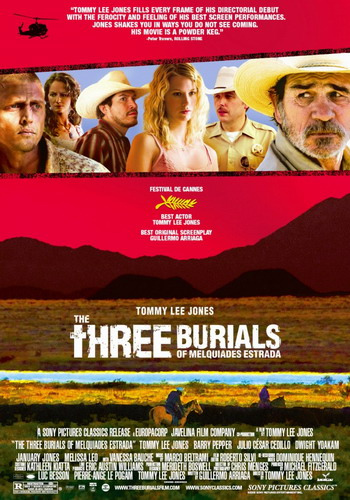 The Three Burials of Melquiades Estrada is a 2005 neo-Western crime drama film directed by and starring Tommy Lee Jones in his directorial debut.

Melquiades Estrada (Julio Cesar Cedillo), a Mexican working as a ranch hand in Texas, is killed through a misunderstanding, and his body hidden in a shallow grave. After his body is discovered, it is given a proper burial, but Melquiades' best friend Pete (Jones), who knows that he wanted to be buried in Mexico, decides to steal the body and take it back to Melquiades' home town — with the extremely unwilling assistance of Norton (Barry Pepper), the man who killed him.