Series / Diary of a Future President 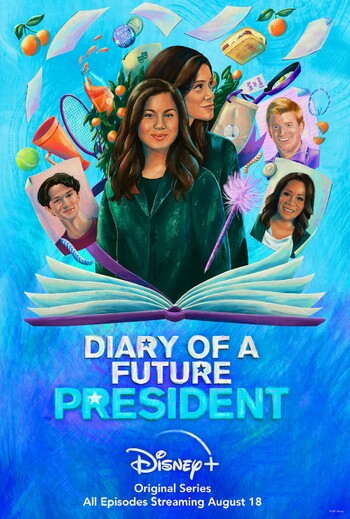 Elena Cañero-Reed has just been elected the first female and Latina President of the United States, and on her first day receives a special delivery from her mother Gabi: her childhood diary, with a message to never forget how she got there. And so she's sent on a journey down memory lane, chronicling her childhood as a Cuban-American girl struggling to navigate the "jungle" of middle school, while also dealing with her mother starting to date for the first time since her father's death.

The series is a high-concept dramedy on Disney+ created by Ilana Peña and executive produced by Gina Rodriguez, who also plays the adult Elena. It's produced by CBS, and is the service's first project to be licensed from an outside developer.

The first season of 10 episodes premiered on January 17, 2020 with a new episode available to stream every Friday.

The series received a second season order of an additional 10 episodes in May 2020. Season 2 made its debut on August 18, 2021, with all 10 episodes available to stream. On December 13, 2021, Peña shared that the show was not renewed for a third season. Causing an Instagram account called Renewdiaryofafuturepresident