Series / Dead to Me 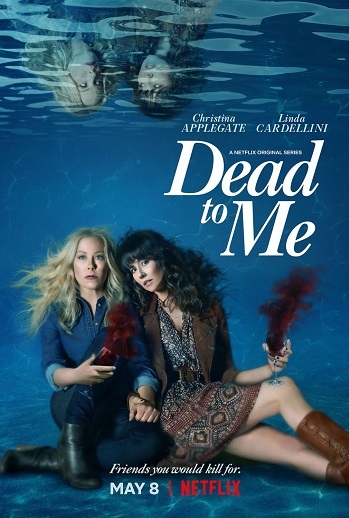 Dead to Me is a Netflix original Dramedy and Black Comedy series.

The show focuses on the odd friendship that forms between two women who meet in a grief counseling group. Jen (Christina Applegate), a hotheaded and tightly wound, widow is trying to pick up the pieces of her life after her husband was killed in an unsolved hit and run. Judy (Linda Cardellini) is a blithe spirit who strikes up a conversation with Jen. The two quickly become friends, bonding over their shared grief, but not all is as it seems.

The show is a very introspective, darkly comedic look into what grief does to a person, with refreshingly authentic dialogue between the two female leads.

It also features James Marsden as Steve Wood, a rich attorney with questionable ethics, Max Jenkins as Jen's business partner, Sam McCarthy as Jen's oldest son Charlie, and Ed Asner as a retiree who lives in the retirement home where Judy works.

The show is full of twists, turns, and drama. Spoilers abound.

Jen: I see you're drinking your feelings.
Judy: WWJD. [Jen looks confused] What would Jen do.