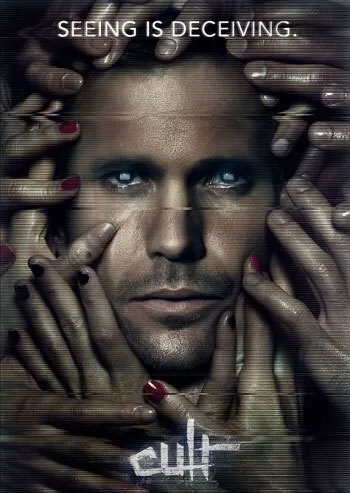 Cult was a series on The CW about a community run by the enigmatic Billy Grimm, and Kelly Collins, a former member who became a cop who was convinced Billy was planning to get revenge on her for leaving, using her family who were still members. It was produced by Steven Rae, an enigmatic figure who never appears in public.
Advertisement:

Cult was a series on The CW about a hit television show about Billy Grimm (Robert Knepper) and Kelly Collins (Alona Tal). Former reporter Jeff Sefton (Matthew Davis) is drawn into a bizarre conspiracy when his brother disappears after leaving several cryptic hints relating to the show. Along with Skye Yarrow (Jessica Lucas), a research assistant on the series who has grown unnerved by the disturbing levels of devotion some of its fans have, he discovers that the line between fact and fiction around the show is far from clear, and who knows how far this rabbit hole goes? It is produced by Rockne S. O'Bannon, the creator of Farscape.

The CW aired 7 of the 13 episodes filmed and dropped the program from its lineup in April, 2013.