Running Over the Plot 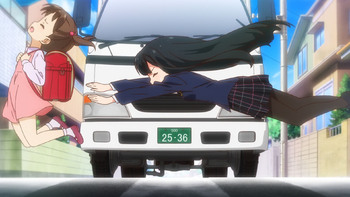 And here's where our story really starts...
"What a way to go." (Beat) "Run over." (Beat) "Twice." (Beat) "By two consecutive buses."
— Tracey Stubbs, Birds of a Feather, "It Happened in Hollywood"
Advertisement:

Someone is hit by a car, and that kicks off or resumes the plot.

It may be that The Hero is driving, or not. Maybe they are a passenger, or it's a Getaway Driver, or it's the hero themselves who is hit by a car. This trope counts regardless of who does what, because what matters is the dramatic potential of a character getting hit by the car. It's a memorable way to bring The Team together, and provides immediate stakes. Put simply, car accidents are dramatic.

The injuries incurred by this Inciting Incident can range from death, in which case it's usually a Plot-Triggering Death, to serious injury, to being completely unharmed. The latter often doubles as an a Big Entrance. It may overlap with Drunk Driver or Drives Like Crazy (especially in more comic settings), and it may be caused when Driver Faces Passenger or by Vehicular Sabotage. It can be related to Look Both Ways, if the character doesn't look before they step out.

It's a well-observed cliche to start an isekai work with the protagonist being run over by a vehicle so they will die and Reincarnate in Another World. Memetic Mutation has conflated these into "Truck-kun

", the same truck heroically going around killing ordinary teenagers so as to send fantasy worlds the hero they're summoning. Characters sent to these worlds in this way are often said to have been "isekaied."

If a character (nearly) runs into someone, but doesn't actually hit them (and that kick-starts the plot), that would be a subversion. If a plot ends by someone being run over, that would be an inversion.

Not to be confused with "being run over by the plot wagon", which some roleplayers use as a synonym for Railroading.