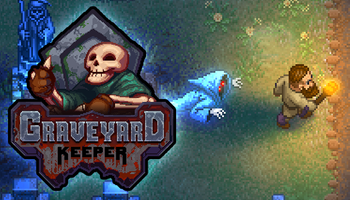 Ready to bury some bodies, Sard?
The most inaccurate graveyard management simulator of the year.
— Lazy Bear Games, the Developers
Advertisement:

Imagine that one rainy, miserable night in the city, you go off to the grocery store to buy some daily necessities and a gift for your loved one. Just as you exit the store and begin to cross the street, your sweetheart calls you, and so distracted by answering, you don't notice the car barreling towards you until you hear the frantic squeal of brakes and a blinding flash before everything suddenly goes dark.

You wake up in a mysterious, foggy plain, talking to a shadowy, ghostly figure who tells you you're now to become a Graveyard Keeper, and unfortunately, all your many questions about what happened, who (or what) he is, and how you're supposed to get home are to be answered by a man called "Gerry." You suddenly find yourself in simple hemp clothes in a cozy cabin, and after digging up Gerry (who turns out to be a talking skull with amnesia) and a misunderstanding with the local bishop, you find yourself thrown deep into the dark business of dealing with the dead while trying to find a way home.

Graveyard Keeper is a management simulation game, essentially Stardew Valley or Harvest Moon with much more corpses and a far darker, grimmer, and comedic take on the Medieval country life. The game has you doing many of the staples of the genre such as gathering resources, growing crops, and gradually expanding to more complex and profitable ventures— like, say, carving off flesh from dead bodies and selling it to the local innkeeper, helping a zealous inquisitor find witches and make their burnings much more appealing to the masses via advertising flyers and free food and drink, or entertaining the whimsies of a lovely singer named Ms. Charm.

The game was released on August 15, 2018 by developer Lazy Bear Games, the creators of Punch Club, with tinyBuild once again acting as the publisher. Four DLCs have been released: Breaking Dead, Stranger Sins, Game of Crone, and Better Save Soul.