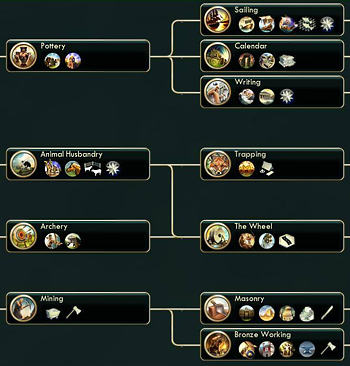 A staple of almost every strategy game is the ability for you to unlock new abilities for your units, or new unit classes entirely, by spending time and resources on scientific research instead of just bashing your opponent into submission with your existing ones.

Exactly how the tech tree works varies greatly depending on the game genre.

In Real-Time Strategy games, research is usually represented by specialized units or structures, with the pace of new tech development decided by how many of these the player has on the field. Research units often have weak attacking abilities (if they can attack at all) and must be protected from harm. Smart players and AIs will, of course, constantly be after these units.

Tech upgrades are usually dressed to look genre-appropriate for the game. Researching advanced radar tech for your helicopters in one game will be instantly recognizable as granting your Paladins "Holy Sight" in another (or, in some cases, the same game).

Another key feature is that they usually follow a set order in which they must be researched. To give your troops armor-piercing shell upgrades, you may have to first research the advanced artillery tech, which in turn can't be done until you've finished researching basic cannon tech, etc...

Some games allow players greater influence over their gaming economies, and they can pour extra money into certain research projects to get them done faster while completing less urgent ones at their leisure.

Other times the development speed is static, and all that's required is that the player have enough gold, tiberium, wood, mana or whatever is needed to pay the upgrade costs for that tech.

The use of tech trees in 4X games is quite different. Tech trees typically do not have an on-map representation. They are a function of the empire itself. In such games, each empire's cities (or equivalent) provides some portion of research that is pooled until the civilization researches a particular technology. The rewards for a tech are improvements for "cities", new units or unit equipments, bonuses for a civilization researching them, or other such things.

Some Role Playing Games have the similar "Feat Tree", where at character creation time and at every NthLevel Up the player gets to choose new traits and abilities (feats) for their character, with some feats requiring other feats to unlock. Refer to Skills, Scores, and Perks for more information.

Tech trees are one of the big points where historians pick at games. It's a hierarchical view of science, research, and history. When compared with actual history, tech trees are wrong. On the other hand, the few attempts at doing something different have wound up pulled from any final version, with good reason.

Either way, researched technologies in many games, most often Real-Time Strategy, have an annoying habit of disappearing once the current level/mission is completed, forcing you to spend time researching them all again in the very next round.

See also You Have Researched Breathing, Reinventing the Wheel. A Tech Tree may be prone to Interface Spoilers, or conversely, it may become a Guide Dang It! to make an informed decision.