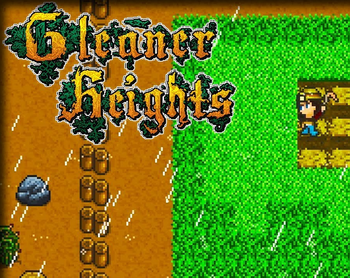 The protagonist recently left their previous life to be a farmer. The sleepy little town of Gleaner Heights looks on the surface to be a rather idealistic place full of happy townsfolk, however this is simply a surface facade. If you delve deeper you'll find out things aren't quite what they seem.
Advertisement:

Gleaner Heights is a farming simulator, released on February 21st, 2018 for PC, and on April 10th, 2019 for Xbox One. It is heavily inspired by the classic Story of Seasons titles. It also takes inspiration from Stardew Valley and Twin Peaks. It is a gothic twist on the Farm Life Sim genre. There are many ways to play the game. If you so wish it, you can even play the entire thing without seeing any of the dark aspects of it.