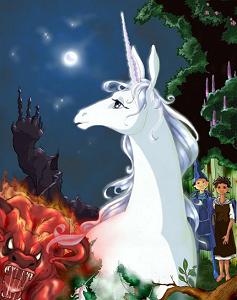 Of all unicorns, she is the only one who knows what regret is — and love.
Molly: Then what is magic for? What use is wizardry if it cannot save a unicorn?
Schmendrick: That is what heroes are for.
Advertisement:

The Last Unicorn is an animated Film of the Book, based on the novel by Peter S. Beagle, and animated by Topcraft for Rankin/Bass Productions. It was produced and directed by Arthur Rankin Jr. and Jules Bass.

In a certain lilac wood, the leaves and snow never fall. This eternal springtime is watched over, and caused by, its magical resident—a unicorn (Mia Farrow). Having never left her forest, the unicorn is surprised to overhear two hunters speaking about the disappearance of the unicorns. In fact, they believe her to be the very last.

Unwilling to accept this, the unicorn leaves the safety of her forest and sets out to find others of her kind, following the information given to her by a philosophical butterfly. Along the way, she learns through bitter experience of human cruelty, ignorance and greed. She is mistaken for a horse (much to her displeasure), captured and placed in a circus sideshow, and pursued by a demonic being—the Red Bull, which, according to local legend, is responsible for the disappearance of the other unicorns. She also meets allies who join her in her journey; the incompetent but sweet-natured wizard Schmendrick and Molly Grue, a middle-aged bandit woman with a purer heart than most virgins.

Their quest takes them to the barren lands of the embittered King Haggard (Christopher Lee), master of the Red Bull, and his naive foster son Prince Lír (Jeff Bridges). It is here that the unicorn, superior and aloof to all mortals, is transformed into a mere human, taking the name "Lady Amalthea," forced to see and suffer human weakness and emotion firsthand.

One of the overriding themes is the power of memory. The King remembers feeling happy once and tries to recapture it by kidnapping unicorns; the skull remembers wine; Amalthea is in danger of forgetting herself; Molly Grue remembers her lost youth; and the unicorn will forever remember being in love.

The film's script was written by Peter S. Beagle himself. In July 2011, after years of legal dispute with the distributing company, he finally got paid.