open/close all folders
The Unicorn/Lady Amalthea

The Unicorn / the Lady Amalthea

"I am the only unicorn there is? The last?"
Voiced by: Mia Farrow; Traudel Haas (German dub), Rocío Garcel (Spanish Dub)

The unnamed protagonist of the story, a unicorn who one day finds out she is the last of her kind. She ventures out into the wild to know what happened to the other unicorns, and meets many colorful characters along the way. She has major depression problems. 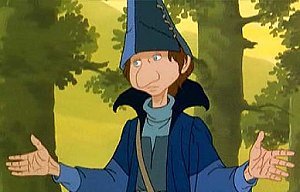 "Take me with you. For luck, for laughs, for the unknown!"
Voiced by: Alan Arkin (English), Jesús Brock (Spanish)

The magician who accompanies the unicorn in her adventure. Though well-meaning, is usually considered to do poorly in magic. 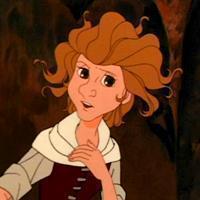 "Where were you twenty years ago? Ten years ago? Where were you when I was new? When I was one of those innocent young maidens you always come to? How dare you, how dare you to come to me now when I am this!"
Voiced by: Tammy Grimes (English); Ema Andrea (Albanian), Gloria Gonzalez (Spanish)

A middle aged woman who dreamt all her life of seeing unicorns until life shattered her dreams. She finally meets one during the story. Accompanies the Unicorn in her adventures and often tends to offer good (if blunt) counsel. She's also the only one that seems to be able to touch the unicorn in that form - this is explicit in the book where Schmendrick is jealous of this for a time (though it passes as their relationship grows), and the cat notes he will not touch even Amalthea lest he lose himself.

Schmendrick: I am a bearer, I am a dwelling, I am a messenger!
Molly: You are an idiot! You hear me?!? You've lost her!
Prince Lír 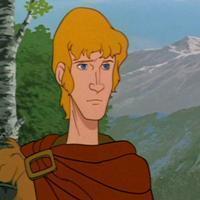 "The happy ending cannot come in the middle of the story."
Voiced by: Jeff Bridges (English), Javier Pontón (Spanish)

A prince the unicorn meets during her adventure. Falls deeply in love with her, but she's initially cold to him. 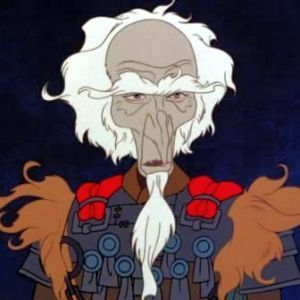 "I like to watch them, they fill me with joy. The first time I felt it I thought I was going to die!"
Voiced by: Christopher Lee (English), Antonio Raxel (Spanish)

The main villain of the story and Lír's adoptive father. Orders the Red Bull to capture all of the Unicorns and send them into the sea. 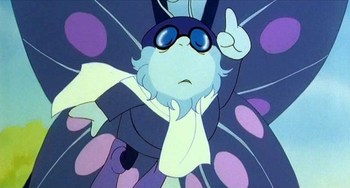 "Your name is a golden bell hung in my heart. I would break my body to pieces to call you once by your name."
Voiced by: Robert Klein

A, well, butterfly that the unicorn encounters in the forest. He's the first being that gives her a clue about the other unicorns' whereabouts. 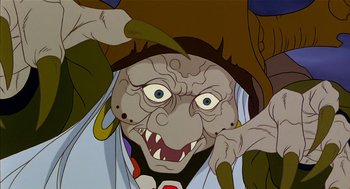 "Oh, she'll kill me one day or another. But she will remember forever that I caught her, and I held her prisoner. So there's my immortality, eh?"
Voiced by: Angela Lansbury (English), Carmina Vásquez (Spanish)

A witch that captures the unicorn during her adventures, and the owner of the Midnight Carnival. Is pretty poor at magic, hence why she captures normal animals and enchants them to resemble mythological creatures. Her fate changes the day she captures a real harpy and unicorn, though not for the better. 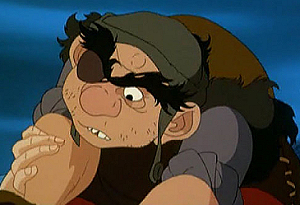 "Okay, Schmendrick, I give up. Why is a raven like a writing desk? Heh?"
Voiced by: Theodore Gottlieb

Mommy Fortuna's not too bright assistant. Conducts the guests through the Midnight Carnival. 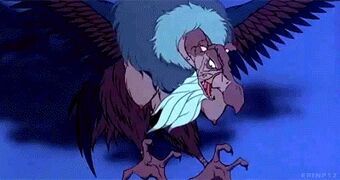 "Set me free. We are sisters, you and I."
Voiced by: Keenan Wynn

The one true mythological creature, aside from the unicorn, that Mommy Fortuna captured. She awaits the day she is freed. 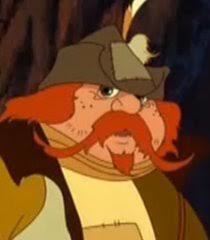 "Tell me what you've heard of dashing Captain Cully and his band of free men. Have a taco."
Voiced by: Keenan Wynn

The leader of the Merry Men-wannabes group of outlaws that reside in the forest and capture Schmendrick. Is stated to be Molly's old flame yet still clings on to his fantasy about their group being a genuine band of heroic outlaws. 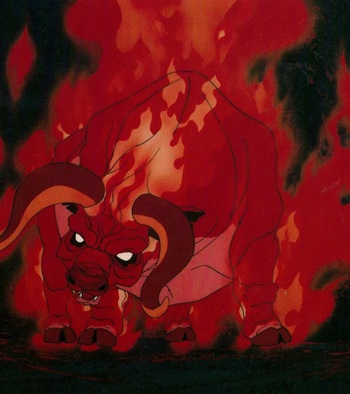 The fiery demonic creature that Haggard commands; he's tasked with finding all of the unicorns in the land and drive them into the sea. His first encounter with the unicorn is what leads to Schmendrick transforming her to save her. 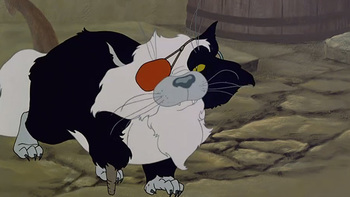 "I would tell you what you want to know if I could, mum, but I be a cat. And no cat anywhere, ever gave anyone a straight answer."
Voiced by: Paul Frees

A cat the trio encounters while on Haggard's castle. Initially gives Molly some advice on how to find the bull, but is mystic about it. 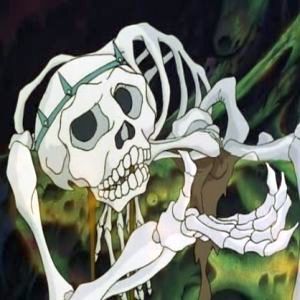 "You can strike your own time, and start the count anywhere. When you understand that — then any time at all will be the right time for you."
Voiced by: René Auberjonois

A talking skeleton the trio encounters in the undergrounds of Haggard's castle, guarding the passageway to where the Red Bull is hidden. Getting him to speak would allow them to enter into the Red Bull's lair.