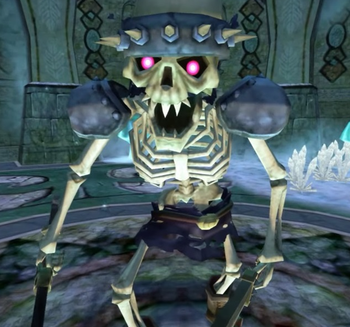 "The Black Rabbit smelled as clean as last year's bones and in the dark El-ahrairah could see his eyes, for they were red with a light that gave no light."
— Watership Down
Advertisement:

Undead creatures will often be depicted as having glowing eyes, usually without any explanation. Then again, in magic-based undead this might either be the glow of the animating magic or magical eyes, created specifically to allow undead to see posthumously. It could be explained as the only visible part of the soul that inhabits the rotting body. Ones that do not actually have eyes, like reanimated skeletons and incorporeal ghosts, will often have glowing lights where the eyes would be. Occasionally, it will be twin ghost-fires burning in the sockets. It is by no means a universal trait of undead. Should Undeath end and the glow fade, it's Eye Lights Out.