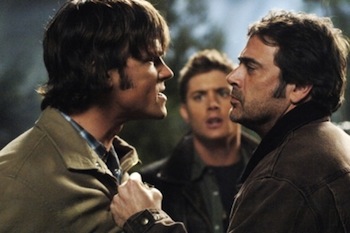 Dean: Sammy, come on, we can Q-and-A after we kill all the vampires.
Sam: Hey, Dad, whatever happened to that college fund?
John: Spent it on ammo.

Sam and Dean are reunited with their father in Manning, Colorado

, where they encounter a nest of vampires.

Sam and Dean travel to Manning, Colorado, after reading about the death of Daniel Elkins, whose name Dean recognizes from their dad's journal. When they arrive, they are reunited with their father and discover that the dead hunter, Daniel Elkins, was in possession of the Colt: an antique handgun forged by Samuel Colt himself, along with thirteen bullets (only a few of which remain) that, when fired from the Colt, are able to kill anything. John wants to use the Colt to kill the demon that killed Mary Winchester but, unfortunately, the Colt is now in possession of the people responsible for Elkins' death: a nest of vampires. Using the vampires' major weakness (a dead man's blood is a paralytic to them), they capture the vampire leader's girlfriend, Kate, and attempt to trade, but the leader, Luther, attacks them. During the fight, John gets his hands on the Colt and uses it to kill the leader with a shot to the head.

For this episode = 2 humans and 3 vampires. We have the first death of a hunter, Daniel Elkins.