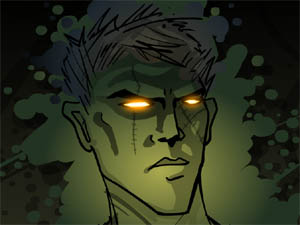 Our Zombies Are Different: The Game.
"Zombies. You've shot them, stabbed them, sliced and diced them. Today I put you in the shoes of a Zombie. Fight for your life in this crazy and twisted world."
Advertisement:

A series of Flash games made by KrinLabs and published by Armor Games, Sonny puts the player in the shoes of a recently deceased young man who, through some sort of experiment, was brought back from the dead as a zombie. On top of this, the man has no memory of his life before death. A blind man by the name of Louis finds him aboard a research vessel, and leads the first man (whom Louis named Sonny because the man cannot recall his real name) to lifeboats that will allow Sonny to escape from the vessel.

Things take a turn for the worse when soldiers from a Mega-Corp known as Zombie Pest Control Incorporated (ZPCI for short) come aboard the vessel with the apparent intent of destroying the ship and all aboard it. Sonny manages to escape, but now he must figure out why he had been turned into a zombie in the first place (as well as who did it) and survive in a world where he and others like him are hunted as vermin.

The first game can be found here

, and the second game is here

In 2017, a re-imagining was made available for smartphones and PC, featuring upgraded art and some big changes to the game and story mechanics, making it a completely different experience with only the characters really returning. You can find it for iOS