Nothing but Skin and Bones 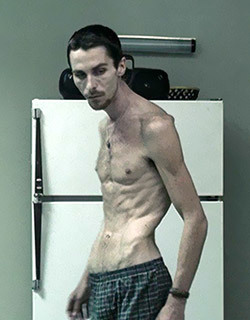 Don't worry too much about him—after all, he's Batman.
"He was very tall and as skinny as a beanpole — so alarmingly thin, in fact, that it looked as if his bones were about to break through his skin."
— Jacob about Sergei Andropov, Hollow City
Advertisement:

A character is shown as exaggeratedly skinny, usually for any of the following reasons:

Most often Played for Laughs, this is usually just a short Sight Gag with no relevance on the plot. Plot-relevant examples are much less common, and are rarely funny.

Sometimes crosses with Lean and Mean. Serious examples may be the end result of Weight Loss Horror.

Examples of incredibly thin characters with no visible bones instead fall under Noodle People.