Fanfic / Under the Northern Lights 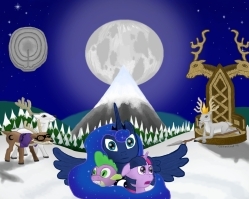 Saga and Vigg, Luna, Spike and Twilight, and King Ukko on his throne.
Advertisement:

Under the Northern Lights

is a My Little Pony: Friendship Is Magic fanfic written by CoastalSarv (formerly sieurin, and who calls himself Nattam on fanfiction.net). Princess Luna travels on a diplomatic journey to the cold reindeer kingdom Tarandroland, since reindeer pirates use it as a base to plunder northern Equestria. She brings with her Twilight Sparkle and Spike for help and companionship. The mission turn out to involve more action that politics, and, to quote the descriptive summary, Luna & Co have to deal with: "scheming unicorn courtiers, unfriendly surly reindeer, bloodthirsty pirates, ancient sorcery and dangerous monsters", not to mention old magic and beings born before Luna and Celestia. Every year, the reindeer have to fight Winter to make it go away — but this year it seems the battle is lost already in autumn... is it possible that this time Winter might win for good?

The story is a rather episodic fantasy story of the epic sort, with much Worldbuilding, not just for the country of Tarandroland but for everything from Equestrian comic books to the elder relatives of Luna and Celestia. It is ongoing, and until finished this page represents the unfinished story.

Under the Northern Lights contains examples of: